President of A&R of LMG 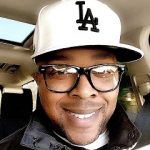 Legacy Music Group has tapped multi-talented GRAMMY® nominated singer, producer, songwriter Eric Dawkins as President of A&R of Legacy Music Group.  Eric Dawkins has experienced a string of success penning, producing and collaborating with; Christina Aguilera, Justin Bieber, Mary J. Blige, Chris Brown, Toni Braxton, Mary Mary, BeBe Winans, Fred Hammond, Babyface, Tyrese and more. As a member of the dynamic Christian duo Dawkins & Dawkins (with brother Anson), the group has delivered many hits including: God In You, Focus, Need To Know and Praisin’ On My Mind to name a few. I had  the pleasure of speaking with Eric Dawkins. He’s not your normal behind the desk President of A&R as you find out. Eric Dawkins is more than capable of creating major hits out of Legacy Music Group.

END_OF_DOCUMENT_TOKEN_TO_BE_REPLACED

The new release, “Twenty,” contains fresh new music from Boyz II Men, their first new music set in over 9 years.  It has been a long time since we have heard a true love song over the radio with harmony, melody, and nice lyrics regarding love. “More Than You’ll Ever Know” is a great song for a wedding and just because. With today’s technology Boyz II Men are able to reach loyal fans and gain new ones. The Boyz have launched their own Mobile App (for iPhone & Android smart phones). The Boyz II Men App creates a network for the groups fans to be the first to hear about new music, videos and concerts. Features include live broadcasts from Boyz II Men, music videos, social media feeds, giveaways and much more. Talk about Key Players in the business.