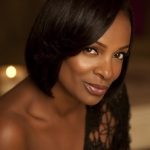 Vanessa Bell Calloway has returned to stage with a sold out performance in Los Angeles of Letters From Zora, about the life of the legendary writer Zora Neale Hurston. There is no end to the talents of renaissance woman Vanessa Bell Calloway.  She is the creator, writer and executive producer of her reality based web series In The Company of Friends and host of her Blog Talk Radio Show, That’s So Very Vanessa. It was an honor to have Vanessa Bell Calloway a true Key Player to give us a bit of her time to talk about her projects, visit her website www.Inthecompanyoffriends.tv