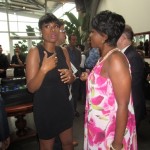 Jennifer Hudson is Broadway Bound!  The dynamic singer and actress is about to make her debut on the Great White Way as the sassy Shug Avery in a revival of The Color Purple.  At an exclusive cocktail party in Chelsea Piers in New York City, JHUD says she is thrilled to lend her vocal chops to the landmark musical which features gospel, blues and jazz. This will be a must-see production because the talented performer is poised to add a Tony Award to her very impressive awards shelf which includes a Grammy, an Oscar and a Golden Globe Award. Sporting a svelte figure in a black dress, the songbird enthusiastically told television personality Cheryl Wills that the Pulitzer Prize winning novel by Alice Walker and the classic Steven Spielberg film are among her favorites and JHUD says she plans to give the role everything she’s got.

And JHUD won’t be alone.  The role of Celie will be played by British actress Cynthia Erivo. The stage veteran who wowed audiences in London with her portrayal of Celie is excited to bring that energy to the New York audience.  I think it’s important for young girls to see this role – to see that women can overcome and be strong and get to where they need to be says Erivo.  And finally, Orange Is The New Black star Danielle Brooks will take on the powerhouse role of Sophia You Told Harpo To Beat Me … a cinematic role that earned Oprah Winfrey an Oscar nomination.  Speaking of Oprah, the billionaire entrepreneur is one of the producers of the show.  The curtain goes up during the 2015 holiday season.

From Pimp to Prince