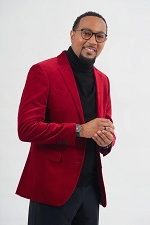 Rufus Johnson is a singer-songwriter, vocal arranger and producer. In a solo turn from his former group G.I. which, Rufus co-wrote two of their top 20 billboard singles; Pray and Don’t Worry and I’m Ready. Now as a standalone recording artist, Rufus Johnson has brought front and center his creative works. His solo debut Thank You, climbed the music charts and received rave reviews.  With Christmas just around the corner. Rufus Johnson released a rendition of the late great Nat King Cole’s classic, This Christmas Song. Now, I must admit, I am always concerned when a singer touches such a classic song. However, Rufus Johnson pays homage, delivers and does not disappoint. This Christmas Song, displays his vocal talents and his natural ability to sing.  Being part of the group G.I. helped Rufus to believe in himself, to step out and take his solo lead.  He is off to a great start. END_OF_DOCUMENT_TOKEN_TO_BE_REPLACED