The One and Only Melba Moore!  Always a key-player, Urban Buzz Magazine is honored to acknowledge and give thanks for all the inspiration, all the opened doors, all the music; As well as highlight her widely acclaimed, brand new soul-savvy album – IMAGINE.  Born to the music-manor, Melba Moore’s career spiraled in paths often surprising (to her), but almost always successful. One may call it fate, flavor or favor; and maybe it’s all those things and more, but no doubt Melba would faithfully say – to God be the glory.  Daughter of saxophonist Teddy Hill whose own orchestra featured music-masters Dizzy Gillespie, Roy Eldridge, and Bill Coleman.  Hill was also widely known as the manager of Minton’s Playhouse in Harlem, back in its jazz heyday. Melba’s mother, Bonnie Davis was a prolific and very popular singer with her Don’t Stop Now reaching number one on Billboard’s R&B chart. She encouraged her daughter’s dreams, but also moved Melba to earn a B.A. in Music Education…just in case. Clement Moorman, pianist, music director and loving stepfather was instrumental in Melba’s early piano lessons, as well as her entre’ into showbiz as a session singer which eventually led from there to ..Hair! Purlie! Timbuktu! & beyond.

END_OF_DOCUMENT_TOKEN_TO_BE_REPLACED

Darius James, is making a name for himself as an R&B singer and songwriter. Born and raised in Pendleton, SC, Darius released his sophomore 8-track EP Life As We Know It. His debut singles, By My Side and Empty, are quickly picking up rotation. The EP is available now for your enjoyment. Darius James’ production and collaborations provide that good R&B sound we’ve been missing.  Making music is his passion.  As a newly independent artist, he is taking his career to the next level.  The sophomore project demonstrates his growth as a singer-songwriter.  His vocal style is exclusive to him as an artist.  With an original sound, he has captured support from new fans.  Darius James’ creation process is sitting at the piano and allowing the song to be birthed. His music reflects his journey as a young artist and personal experiences.  Additionally, his confidence and conviction of song have many taking notice.

END_OF_DOCUMENT_TOKEN_TO_BE_REPLACED

Be Kind To Yourself 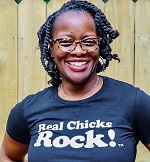 Michelle Dawes Birt is the founder/CEO of Real Chicks Rock, based in Atlanta, GA.  Real Chicks Rock targets women of every ethnic background.  Women who are ready to abandon toxic relationships and address their personal struggles.  Michelle’s organization is quickly growing with women who have cracked their lying mirrors.  Becoming their fabulous authentic self.  Michelle realized that she no longer had to compete with the industry images which deemed a woman beautiful.  There is nothing wrong with make-up, hair weave, heels and eyelashes.  For many of us, that is not our life.  Real Chicks Rock is a 501c3 non-profit organization.  Celebrating eight years in operation.  Many can relate living in today’s society has become very challenging for women globally.  Michelle’s success in identifying her natural beauty and loving herself, launched Real Chicks Rock.  Today she is inspiring women young and old all around the world.  Real Chicks Rock is a banner for all women to know they are to be treated with the utmost respect.