Today is a special day for author Diane Anderson CEO/President of Meet Me At The Crossroads. She is releasing her 3rd book titled When Your Greatest Weakness Becomes Your Greatest Strength In The Kingdom.  This book is a personal testimony of Diane Anderson, overcoming the ugly weapon of fear sent by our adversary.  In her book she provides tools to teach many how to turn their greatest weakness into their greatest strength.  Her book will bless those who will read it.  Especially, since it’s Diane Anderson’s labor of transparency.  Written and inspired by Holy Ghost, the book’s sole purpose is to help those entangled by fear be free from fear. END_OF_DOCUMENT_TOKEN_TO_BE_REPLACED 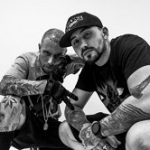 The greatest combination for any duo is like Batman and Robin.  Wes Nihil & Bersurke is that perfect combination. Their new project Peep The Theory is out.  Peep The Theory is a gritty hip-hop classic with that boom bap and head nod flow. For many who may have thought real hip-hop was dead, Wes Nihil & Bersurke say dust off you mics if you dare.  With rhythmic flows and drums, there is no mistaking hip-hop is alive and well.  So, if you have been quarantine and sitting on your couch enduring the water down hip-hop, Peep The Theory will quench your thirst. Wes Nihil, best known as the captivating frontman of Newark, New Jersey‘s popular hardcore band Razorblade Handgrenade (also one half of hip hop duo Crimson Twins), has teamed up with Boston, Massachusetts’ MC & producer, Bersurke of ILL Supreme, to deliver Peep The Theory, a playfully aggressive song/video created and filmed during a family barbeque. END_OF_DOCUMENT_TOKEN_TO_BE_REPLACED