Harlem-based comedian Guy Betancourt is a rising star in the world of stand-up comedy. He was mentored by an acclaimed comedy teacher, the Fabulous Fat Doctor, known for working with Martin Lawrence, Dave Chapelle and Tommy Davidson, to name a few.  Guy Betancourt is following his natural ability to make people laugh on various stages, state to state.  Betancourt is a graduate of New York’s American Comedy Institute, where he studied acting, improv, sketch comedy, comedy writing and stand-up.  Headlining some top comedy clubs, Guy’s performances leave audiences crying and laughing. Guy Betancourt is against humiliating the audience during his shows to get laughs.  He relies on his comedic skills to entertain.  You can see Guy Betancourt in person on April 30th at the Copacabana Nightclub located at 625 West 51st New York. Doors open at 5pm.

Guy Betancourt continues to hone his comedic talents with performances at some of the best comedy venues in New York.  Betancourt has entertained crowds at Gotham Comedy Club, Broadway Comedy Club, The Westside Comedy Club, LTC Stand-up Comedy, and LTC Live.  In August, Betancourt will perform at Fresh Faces of Comedy in Atlanta GA.  Guy Betancourt is a man on a comedy mission.  His rise seems inevitable at this point.  Indeed, he has no plans to stop any time soon.  Welcome our new KeyPlayer Guy Betancourt, a.k.a Latino Black who shares invaluable information regarding comedy do’s and don’ts.  You can connect with him on Facebook and IG @GuyBetancourt PUSH PLAY 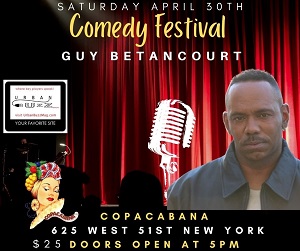