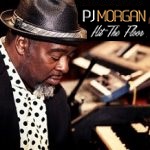 Paul Lawrence Morgan (known as) PJ Morgan is a sought after musician, songwriter and producer. PJ graduated from Bowie State University with a Bachelor of Arts degree in Music Technology, and a minor in Classical Piano performance Magna Cum Laude. Currently PJ has been very busy. He just finished up his debut solo instrumental Jazz Album The Transparency Project. While teaching Composition and Theory at The Duke Ellington School of the Arts in Washington, DC. His new album project represents his musical blends of both smooth Jazz and his church influence, which  features his organ arrangements. I had the pleasure of speaking with him about his journey.

The Transparency Project is filled with PJ’s musical gift as an organist. It’s a calling card with featured songs like Hit The Floor, Closer, How, Yes God Is Real and so much more. The Transparency Project include vocal talents of Antonio McClendon and John Stoddart.  PJ Morgan’s musical transparency and growth is featured as well.  When you have been in the business for so long it’s only a matter of time before you are called to create your own sound.  PJ has played for a host of well known musicians and gospel greats.  In our interview you will hear his journey and what he has learned along the way.  PJ Morgan gives credit to Mr. Ben Tankard who helped open his doors. PJ is a 3X Stellar Gospel Music Award nominee for Producer of the Year.  We want you to tune in to our interview and welcome our new KeyPlayer Mr. PJ Morgan. Hear more about his new record company titled 1DMV Music Group and the lesson he learned from Mr. Ray Chew. There is a wealth of information from PJ now performer, producer and teacher. Connect with PJ on social media @PJMmorganMusic @PJ_Morgan PRESS PLAY