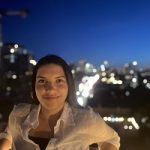 Gabriella Douglas’ sole purpose is to take a well thought out concept to vision and transport audiences into an authentic entertainment experience.  All to reflect the theme, mood, style, and emotions of a film.  Including the historical or geographic context of the production.  Gabriella is currently working on Chucky Season 2, set to air this fall 2022.  Chucky provides yet another set of skills to embark on. The horror genre. Gabriella’s trained eye for detail and knowledge of recreating authentic real life sets is her strength.  Gabriella’s  film credits include: SEE Season 2, Rock-a-Bye, SEE Season 3, Mrs. America (which was Emmy nominated). Star Trek Discovery Season 2, Sweet Smell of Success, Tall Boyz, Star Trek: Short Treks Season 2, The Truth About Unicorns, The Dinner Party, and The Witchfinder.   Welcome our new KeyPlayer Gabriella Douglas.  You can connect with her on her website https://www.gabrielladouglasdesign.com/about  PUSH PLAY